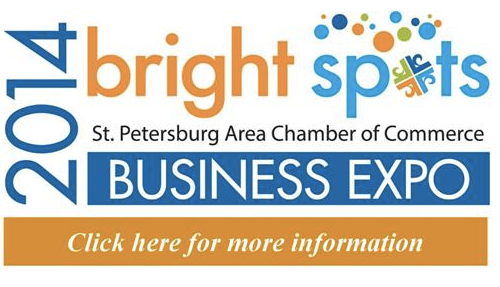 Top Off The Trop and Baseball is Good Business will be coming to the Expo today!

Thanks to our friends at Baseball is Good Business we will be attending the St Pete Chamber Business Expo today at 3pm! Click for more information. Brett here at #TopOffTheTrop can’t wait to meet you!

Thanks to our friends from Baseball is Good Business (for this).

Introduce new fans to Rays Baseball
Say Thank You
Reward staff
Donations for charitable causes
Give as holiday gifts
Spend quality time with friends
Networking
Entertain customers
Welcome a new employee to the company
Use for personal therapy after a difficult day
Give tickets to your child’s coach
Increase profits
Invite a customer who hasn’t done business with you recently
Use as an auction item
Give as birthday gifts
Offer them to someone who has given you helpful business advice
Employee incentives
Donate to patients at a local hospital
Welcome a new neighbor to town
Use tickets to recruit a new customer
Make new friends with your fellow Rays regulars
Give to Boys and Girls Club or other children’s related charities
A night out with your significant other
Reward suppliers
Thank volunteers for all that they do
Develop relationships
Use for trade opportunities
Help part-time workers feel more like part of the organization
Give your children a wholesome pastime for the summer
Give as anniversary gifts
Reward vendors
Offer to your neighbors for taking care of your pets and getting your mail while you were away
Treat a member of your school board or union to promote goodwill
Get to know key co-workers outside the office
Give them to your child’s teacher as a thank you for their help
Meet a blind date at the seats
Reward your ‘Employee of the Month’
Give to a person whom you owe a favor
Enhance existing relationships
Take someone who does business with the competitor
Give to a prospective employee who is interviewing from out of town
Offer tickets to a service person that has taken care of you
Reward a customer who gave you a referral
Give as an engagement or wedding gift
Spend quality time with your family
Take a long-time customer to say ‘thanks’
Give to members of a club you are in
Generate new business
Boost employee morale
Try to enhance business with a smaller client
Thank a customer who praised your company
Give tickets to a Good Samaritan
Get to know a business colleague
Give to restaurants that you frequent with clients or family members
Reward your children for good grades
Show your appreciation to a company intern
Give to your mechanic, doctor, dentist, etc.
Packing them into a product to promote sales
Put a smile on an employee’s face who is stressed out
Offer to your babysitter as a thank you
Give them to a good employee who doesn’t get commission
Invite an old friend to reconnect
Treat a loyal customer on his or her birthday
Reward a department that hits their quota or goal
Have a drawing at work and give them to a lucky employee
Use tickets as an incentive for someone to quit a bad habit
Reward yourself after meeting a milestone in your life
Give your tickets as a graduation present
Get to know a business colleague
Give tickets to a team you sponsor
Offer to someone who has always given you great service
Use your tickets for a raffle or drawing
Send staff members to a game, with a meeting over dinner
Boys or Girls Night Out
Win back a customer who had a problem or complaint
Propose at a Rays game
Give your tickets to a relative
Take someone you mentor out to a ballgame
Enhance relationships with those that refer your business
Bond/network with fellow employees or other business professionals

1) Rays play better when the Stadium is Full. At least Team President Matt Silverman said so this week.

2) No one is expecting a sellout on a Thursday night against the Yankees. Might be expecting a good crowd, but no sellout. Don’t believe me? In our 9 home games against the Yanks in 2013 we missed a sellout by an average of 10,600. I love it when the odds are against us Rays fans, don’t you? Also it’s early in the season and it sends a message to the media, our opposing fans and the Tampa Bay area community. We Care!

3) Opportunity to Strut Your Leadership Skills. Build a TOTT Group at Work or at your Church. Show yourself that there is a leader inside of you! Seriously just getting a small group together takes skills! Energy, charisma, accounting skills (make sure everyone paid up) and strategy (how to get everyone to the ballpark)

4) A big crowd on an off night will SPIKE our average attendance figures. We were dead LAST last year in MLB. We’re not doing THAT again.

5) You get a FREE RAYS HAT. As my Uncle always says “Free Tastes Better,” and you know what? He’s right. Though don’t eat your hat that would be gross. Give it as a gift or keep it to wear yourself — but don’t eat it.

6) You get to have this hilarious conversation while building your group. “You want to take the Top off of Tropicana Field?” “No we want to TOP IT OFF, uhhh like you would Top Off your gas tank.” Yes some people will think you want to make Tropicana Field a dome no more. Redic.

7) Opportunity to meet new people, see old friends or network with those you usually wouldn’t with. Treat TOTT like a networking event or use it as an excuse to get an alumni group together or just a group of old friends. Shouldn’t be too hard the YANKEES ARE IN TOWN.

8) Be the first in Tampa to wish Derek Jeter a happy retirement. Jeter has said he will retire at the end of the year. While I struggle to find nice words to say about the Yankees (and some of their fans) Jeter is pure class and has been a huge asset to the game of baseball. In fact he was hurt so much last year you probably forgot how good he is. TOP OFF will be the Rays first shot at seeing him.

9) It’s a $30 dollar lower level seat! Up to a $70 dollar value! Those who get in early will have some great seats! See isn’t this an easy sell to co-workers, colleagues, friends, peers, acquaintances? That’s what I thought!

Bonus Reason: Last year your ticket got you a free drink at Fergs Sports Bar and discounted grub at ZGrille. We will be reaching out to multiple local businesses for similar benefits this year!

Joe Maddon used 147 different lineups in 2013. 147! Use the comment section below and give us your Opening Day lineup.

Are you going to Rays Fan Fest Saturday?

I’ve always enjoyed Rays Fan Fest. It’s a great time to frankly enjoy the ballpark without the distraction of … well baseball! For several years in a row it’s been a tradition of mine. My girlfriend and I would have lunch at the Brewhouse, play some games and take lots of pictures. I’ve heard quite a bit of chatter on social about the expense of autographs and all I’ll say about that is that through the year most of the players make a point to sign at some point before every game. If you want to guarantee the autograph of your favorite player though Fan Fest is certainly a great place to do it. There’s also lots of charitable opportunities including Joe Maddon’s Thanksmas. Also it’s another great opportunity to grab some of the new Rays gear and check out some of the retro stuff in the Charity Yard Sale. I’ve always thought too it’s a great opportunity to meet Rays fans in a very relaxed atmosphere. Tweet Up anyone?

So are you going? Feel free to comment below!

Complacency will get us…I mean gut us!

Below is an example of something I am seeing and hearing more and more. I have removed the name of the author of this tweet but it was in response to a question about would you attend more or less Rays games than last year. What frightens me about this response is that it says “when they move the stadium to Tampa” not “if.”

When I began Top Off The Trop I unrealistically tried to stay as far away as I could from the Stadium issue. I still do my best to avoid the issue (not always easy). I am a Saint Petersburg resident but I’ve supported the Rays when I lived in South Tampa, Clearwater and Gainesville. I have to admit “if” the team moved to Tampa I would still continue to support the Rays. I really do want what is best for the club in our area. NOW having said that I don’t believe the Rays are convinced that moving to Tampa would be hitting an “easy button” on the attendance challenge (there would be a bump for a while, but it could be potentially short lived like what Miami saw). And yes I BELIEVE that the Rays can work here in Saint Petersburg. And we haven’t even talked about how it would be financed, so BEST TO CONCENTRATE ON THE PRESENT DAY!

My biggest fear right now is that we are getting complacent. Tampa residents will think that supporting the Rays in the present tense reduces the likelihood of the team ever moving to Tampa. Perhaps some Saint Petersburg residents feel that we’ve already lost the team to Tampa. I’d argue the REAL THREAT here isn’t losing the team to Tampa, it’s losing the franchise to a Nashville, Charlotte, Montreal, Oklahoma City or Portland. For some the stadium issue becomes a divisive one — and it’s that kind of talk that has and will continue to get us nowhere. Even if a site had been cleared for the Stadium you’d be what, 2-3 years from completion at best. This isn’t anything that’s going to be resolved ANYTIME soon. This is not the time for complacency Tampa/Saint Petersburg, this is not a time for division…this is a time to recognize the economic impact of baseball in our area and PROTECT it.

Will you attend more games than last year?

Hey Rays fans. As we begin Spring Training and head into the 2014 Season here is a quick question. Do you think you will attend more games than you did last year? I thought the Rays #OneMoreGame campaign drove home a great point about doing that LITTLE extra. Anyway have at our Top Off The Trop  Poll!

Do you need Motivation to Support Top Off The Trop?

I’d like to think with words like “World Series Caliber” being thrown around in Spring Training that our attendance woes will just go away, but I know that won’t be the case. I’d like to think the Free Agent re-signings of David DeJesus and James Loney will drive thousands into the seats but I am aware that it probably won’t be enough. The prospect of seeing last year’s Rookie of the Year Wil Myers back in the Trop surely will bring the fans! Yes true — but we do have to be honest here and in saying that we were DEAD LAST in Major League Baseball attendance last year. But the only way to TRULY address this situation and to make the likes of Evan Longoria grin from ear to ear is to MAKE PROGRESS!

Progress starts with you. It starts with you the fan and creating and executing a call to action! Our goal through Top Off The Trop is to INFLATE our attendance figures by having a few really SPECIAL “off nights” a year.

And not that you needed it but just in case you did, here is some additional motivation: 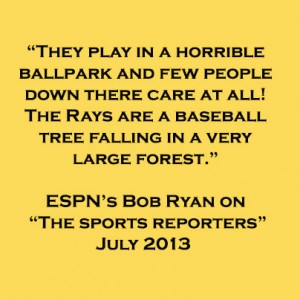 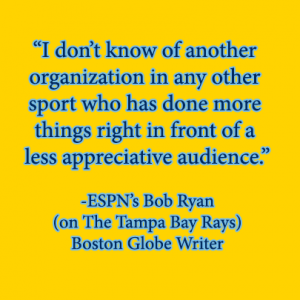 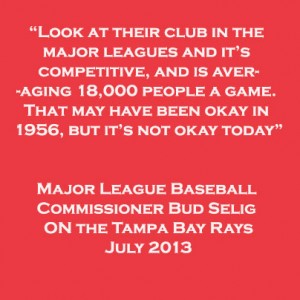